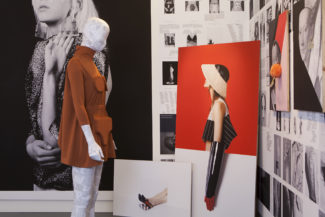 Couture Graphique, organised by the MOTI – Museum of the Image in Breda (NL), is the first exhibition to explore the relationship between fashion and graphic design. It underlines an interesting phenomenon that until now has attracted relatively little interest: the use of fashion clothing and accessories as a means of communication in their own right.
The link between graphic design and fashion emerged in the 1920s, when Sonia Delaunay applied her designs to textiles. The connection was further strengthened by the top couture houses, who began to treat their brand and their visual identity as fashion products in themselves. The curators of this exhibition hope to show how the relationship between graphic design and fashion has developed over the last century.

The exhibition was designed for the MOTI – Museum of the Image, in Breda (Netherlands) by José van Teunissen, a professor of fashion theory at Arnhem and the University of the Arts in London. A specially adapted version of the exhibition opens at the mudac in spring 2014, with a new section, created by the mudac, presenting a selection of work by young stylists from the art and design institutes of Basel and Geneva.
Couture Graphique is in three parts. The first examines the phenomenon of the “total look”. Through historical examples such as the garments of Coco Chanel and Burberry prints, it looks at how some brands have developed a style so personal that they no longer need logos to be recognised. Up-to-the-minute examples such as the handpainted garments of Dries Van Noten, a wedding dress by Victor and Rolf, a Raf Simons ensemble and an installation by A.F. Vandevorst inspired by the hospital environment continue the trend set by designers now considered to be among the greats.
The exhibition continues with the work of several fashion designers who habitually combine graphic design in the widest sense of the term – brand identity, the visual arts, comic strips, etc. – with fashion: Walter Van Beirendonck, Bernhard Willhelm, Henrik Vibskov and Bas Kosters. Visitors are introduced to a selection of clothing, as well as a wide range of communication tools – flyers, brochures, invitation cards, etc. – that document how the brands market themselves. This section also features a collection of t-shirts, probably the most iconic association of fashion with graphic design.
Finally, the third section attempts to identify what tomorrow’s fashions might look like. It shows how a number of contemporary designers incorporate state-of-the-art technology, including laser cutting and intelligent textiles, into their work. Visitors can also watch a series of promotional films created by prominent directors.
The Tech[x]tiles zone contains a number of pieces designed especially for this exhibition, illustrating their Flemish stylists’ vision of the clothing of the future. From a leather armchair transformed into an evening gown, to a hologram dress, the exhibits give an insight into these young designers’ thoughts about the garments of tomorrow.
The majority of the exhibition spaces have been decorated by Gijs Frieling and Job Wouters, who collaborated with couturier Dries Van Noten on the men’s collection of his 2012-13 fashion show. The murals on Level 1 were painted by Paul Boudens, a Flemish graphic artist who often works for couture houses. The entire atmosphere, even down to the walls, is saturated with graphic art and print.